We met the creator of the first Drift Trike! 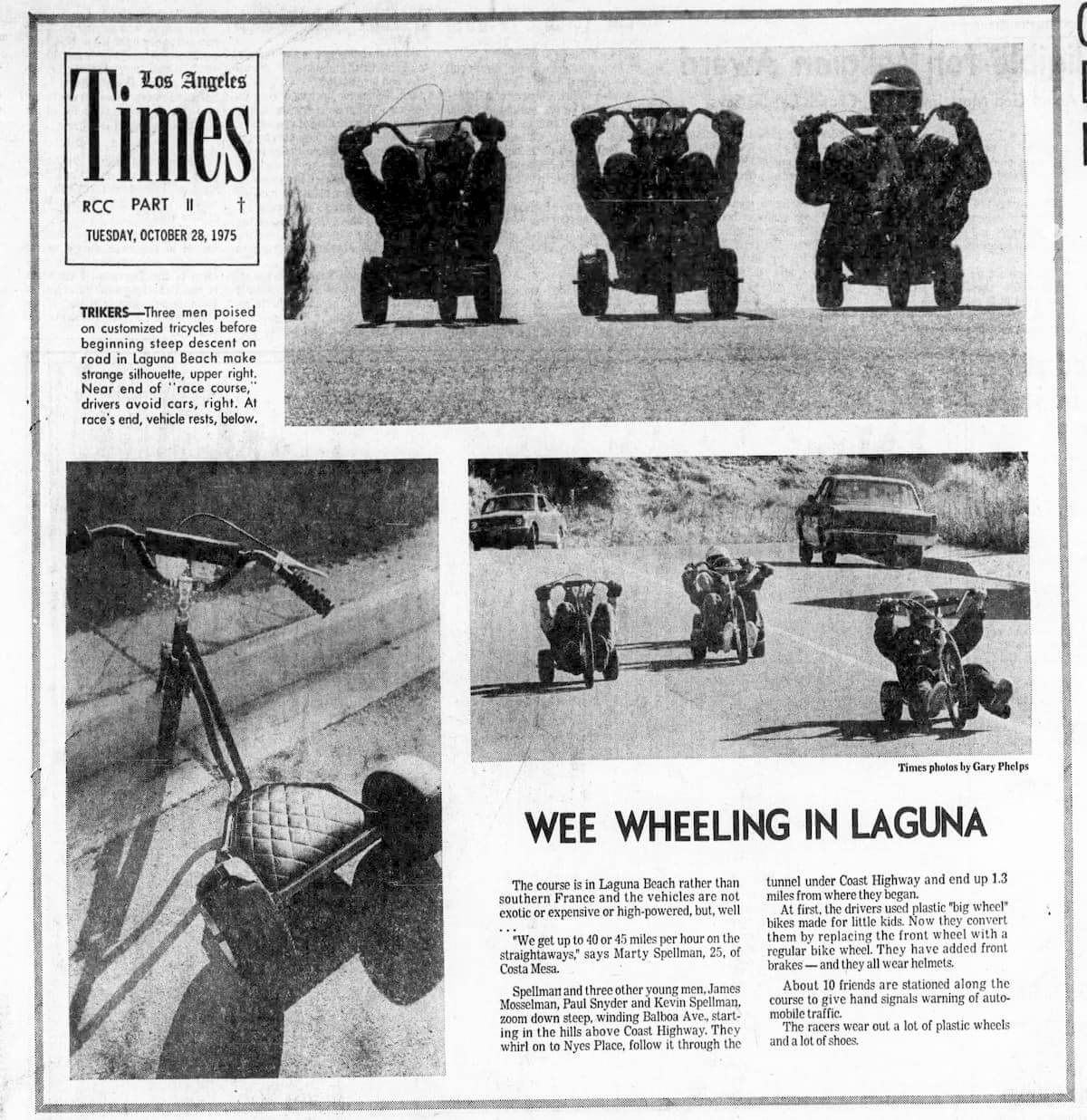 Wikipedia says that drift triking started in New Zealand in the 2000s, but they obviously haven’t heard of Marty Spellman. Marty built his first drift trike in 1974 in Huntington Beach, California, a long time before drift triking kicked off across the ocean in NZ. The Los Angeles Times wrote an article (above) about Marty on October 28th, 1975. Along with his friends, he built up to 17 trikes and he recently spent some time restoring his original ride. The trike was heavily damaged over the years, but Marty was able to bring it back to life.

The restoration project included an updated brake caliper, new handle bars, new grips and a digital wireless speedometer as the old one was mechanical and he could not find one like the old one. Other than that, the trike is pretty darn close to being exactly the way it was in 1974.

We reached out to Marty to find out a little more about how he came to build the first ever Drift Trike.

I believe mine is the only survivor and just barely at that. It was lent to a friend of a friend and came back totally destroyed. The frame was cracked in two places and bent, the forks were bent, the seat was missing, the handlebars and stem were bent, the front wheel had a broken spoke, the brake caliper was bent, and even the rear axle was bent. I would like to meet up with that person again. I’d have a knuckle sandwich for him. So moving on I put it away in the attic for all these years. It had so many great memories I guess i just couldn’t part with it. Anyway after last Christmas Sharon (significant other) was putting away the ornaments and gives me a shout. “What’s this she asks”? Well then I had to tell her the stories and dig out the movie. After all the stories and seeing the movie she told me I needed to restore it. So with that kind of support the project was born. I say project because it was a battle the entire way.

So the first pic is what it looked like when it came out of the attic. If you zoom in at the bottom of the vertical tubes I think you can see the crack in the frame. It was that way on both sides. 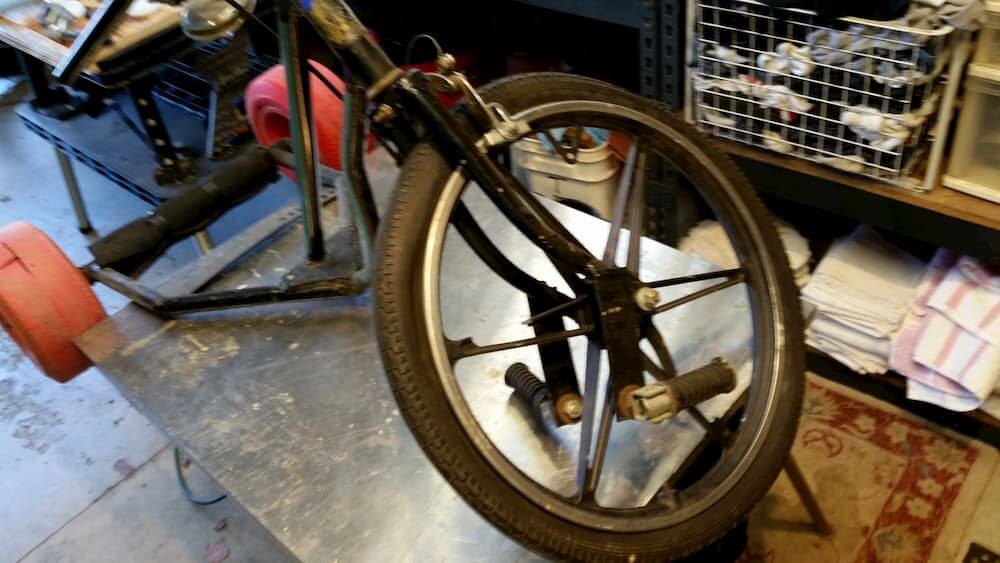 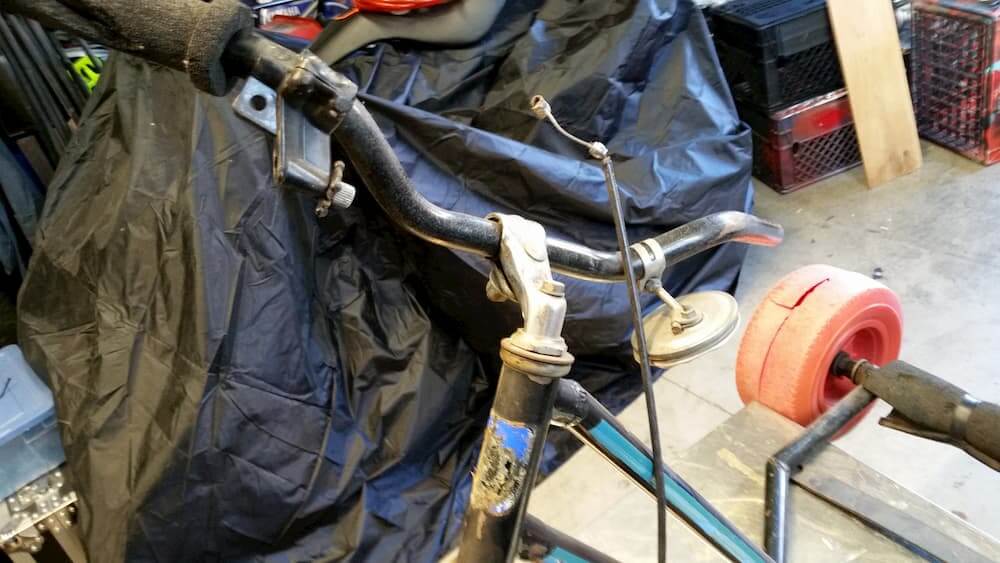 I found two front wheels out of Minnesota that matced what I had originally and had them shipped out. I had to media blast and then powder coat to get them back to the original. Now for the record the very first wheel on the bike was a Dan Gurney wheel. That wheel was stolen. What was on the bike after that wheel is what is on there now. It’s a “Lester” wheel. 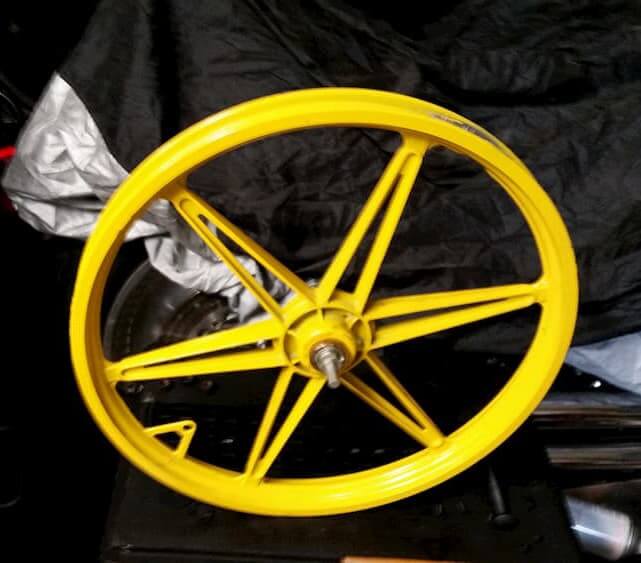 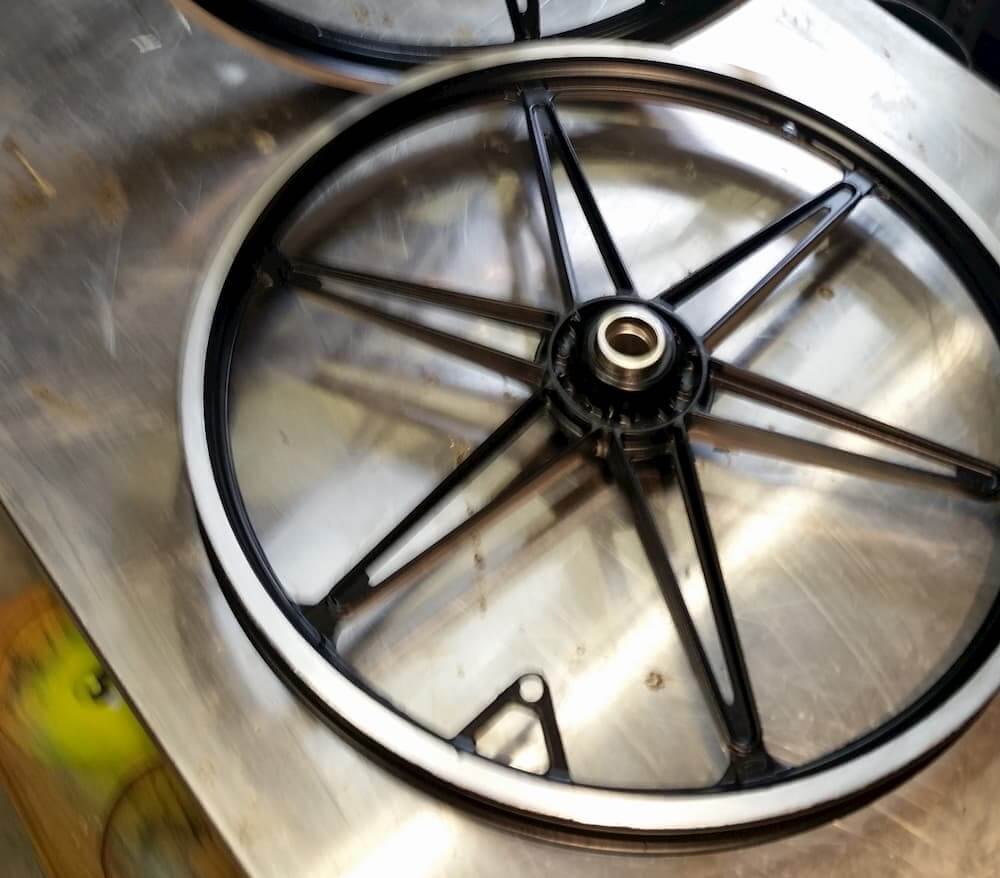 Here is a shot showing the reinforcing ring and rewelding of the frame. I did some clean up welding on the front forks and some straightening. Then I took the old Dremel tool and did some fine grinding two make my crappy welds look good !!! 🙂 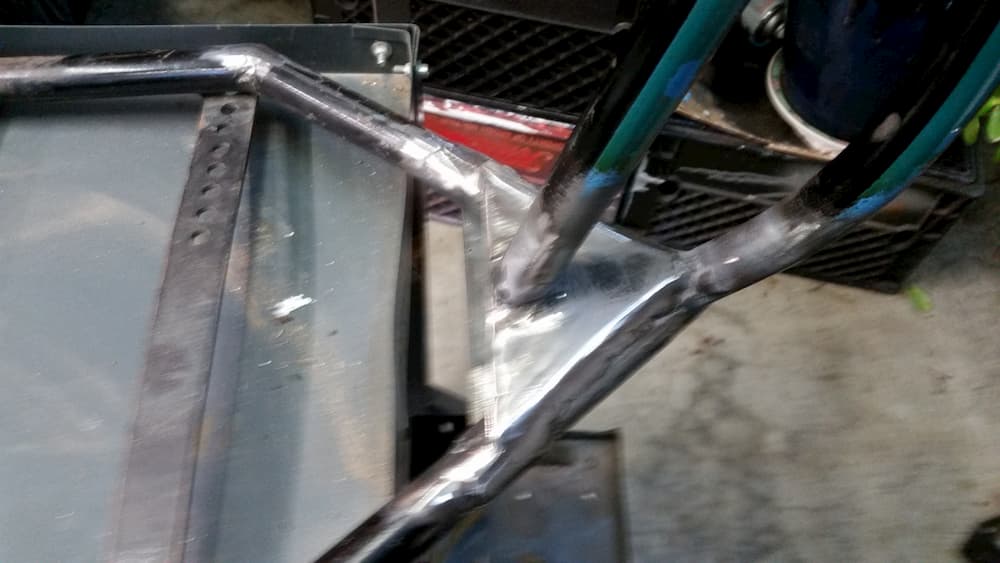 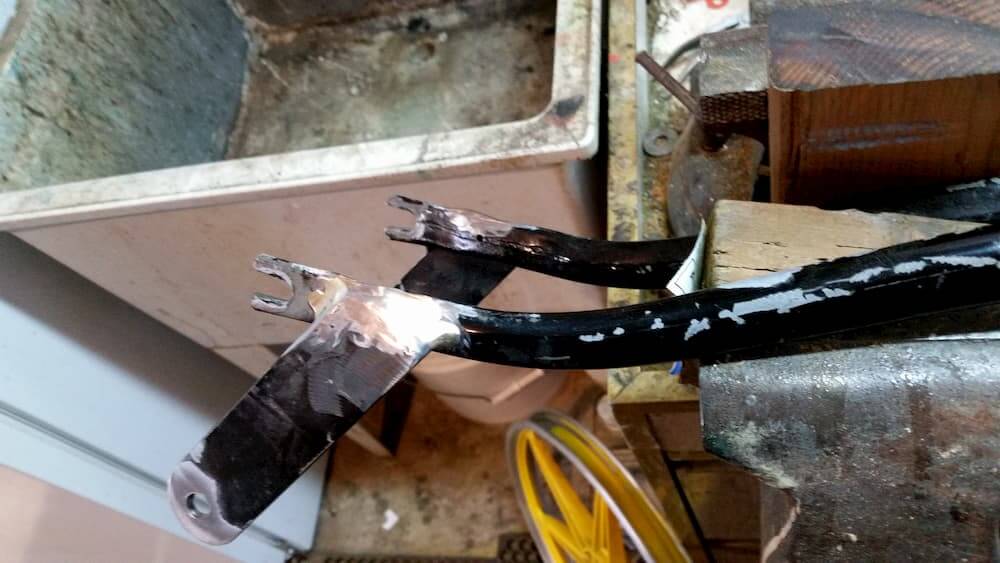 After all the frame/body work it was off to the powder coater. The right way was to powder coat the frame. The original paint was done with a rattle can and about 10 coats of clear Varathane. Also from a rattle can. I did the original two tone stripes. However I thought it best to go with a pro on the restoration. 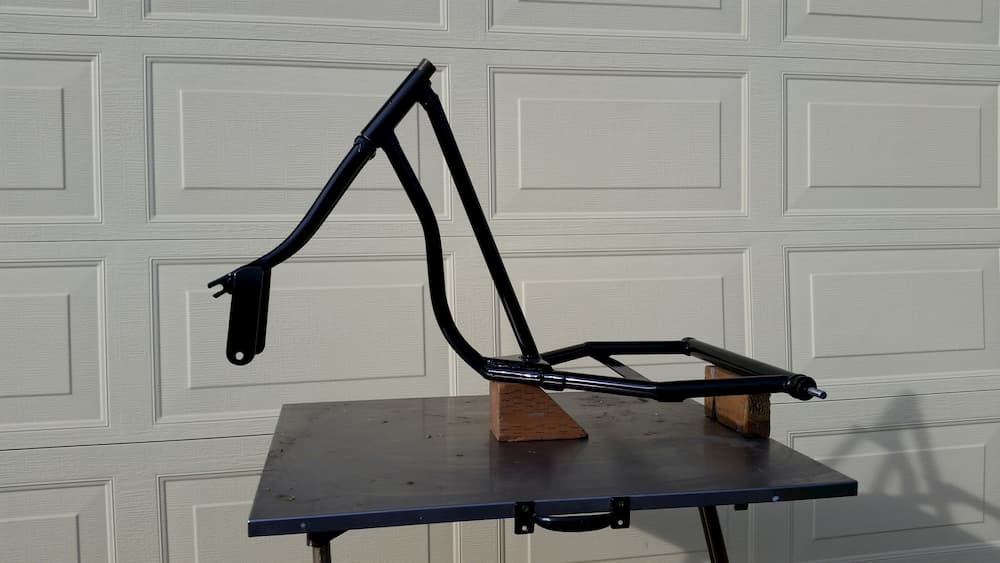 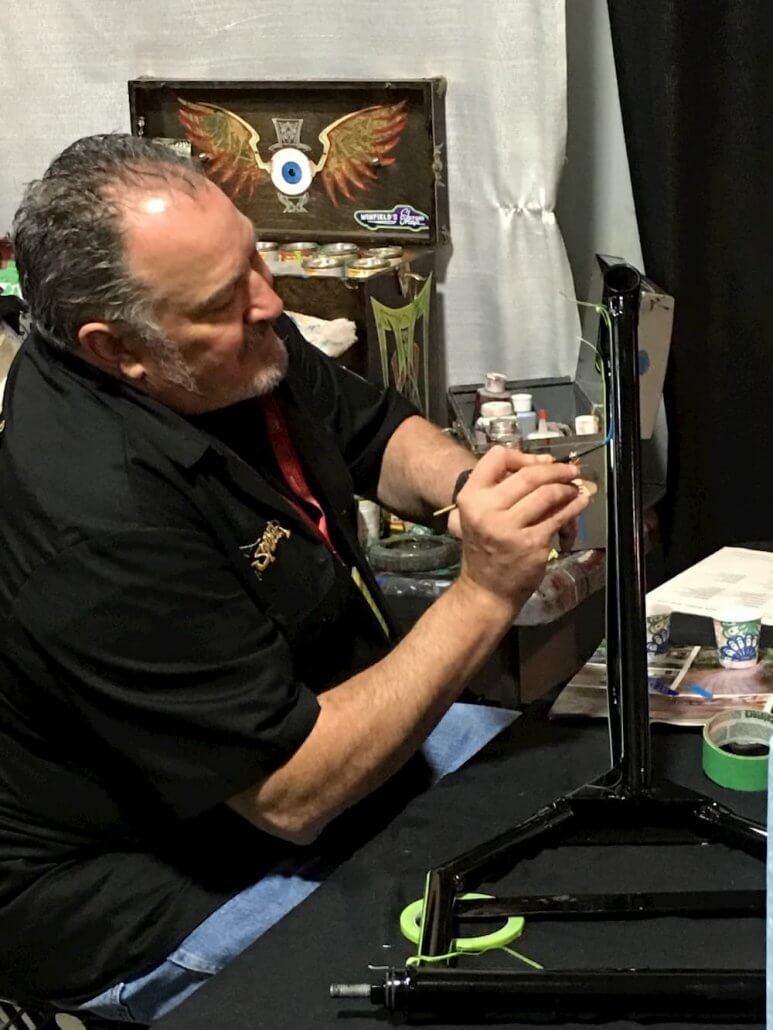 Lastly I had to make a change on the handle bars and stem. I kept period correct with a 70s style stem but went with straight bars as I do plan on going back to the place where the article pictures were taken in hopes of beating the old speed record for that hill. I also put back on a mirror as I had on the original. In the Times picture you can see I had a speedometer just to the right of the handle bar stem. It was mechanical in operation and I couldn’t find one to match. So I went with a Cateye wireless. It’s probably way more accurate that the old one and would be best for any record breaking claims !!! 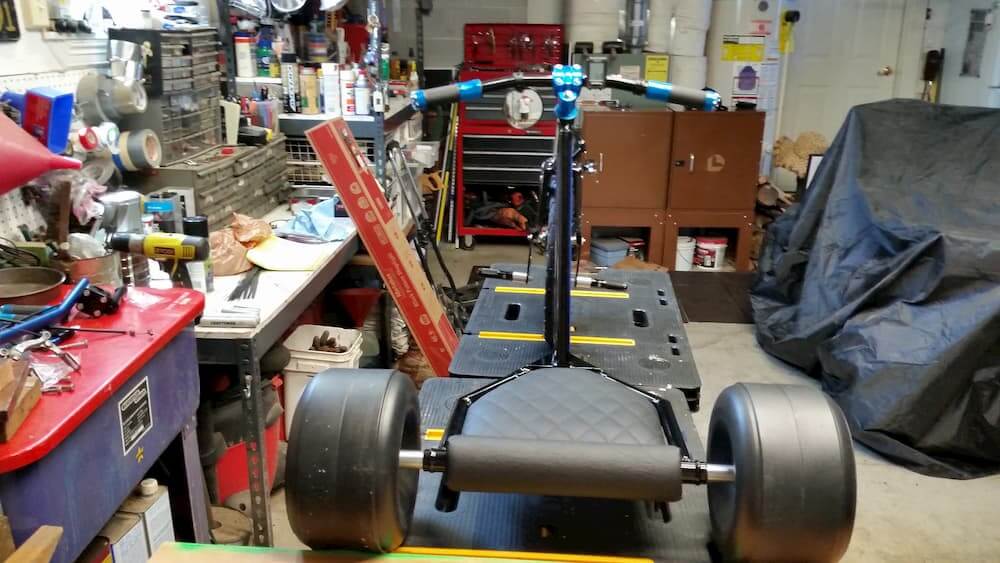 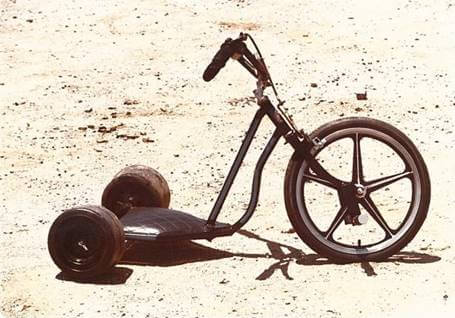 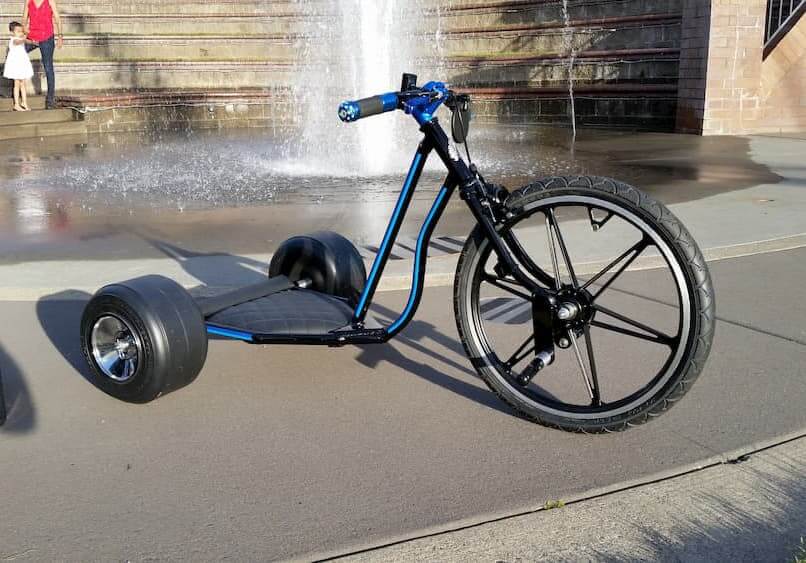 Q. How old were you when you first rode a kids trike?
Well I remember a green and white white trike in an old picture. I was about three years old if that’s what you were asking.

Q. How old were you when you first rode an Adults trike?
I built the first drift trike in early 1974. That would put me at 24 years of age.

Q. Who’s idea was it to embark on the first Drift Trike build?
Well we actually tried riding plastic Big Wheels but they weren’t lasting very long so it was my idea to build something that would last longer.

Q. On your first down hill run, did you go to the biggest hill you knew of or just hit the local hills?
We just hit a local park called Hillcrest Park. It was closed at night and we didn’t have to worry about cars. However we weren’t supposed to be there either and I remember us hiding from the police as they made rounds on some nights. It was a very short run that we could walk back up to make another run.

Q. How quickly did your group/gang take up the novelty?
After I built the first trike we saw that we could go down steeper and longer hills. So the gang was already in place from racing at Hillcrest Park. After they saw the first trike I built and what I could do with it, I was slammed by the rest of them to build them all a trike. So to answer the question it was no time at all. They wanted their trikes immediately. 🙂

Q. Did you have any encounters with Police or local law enforcement?
Oh yes for sure we did. Most of them were pretty kewl but one was a complete …….. well let’s just say I didn’t care for him. He wrote us up on SEVERAL counts for moving violation that would be against our drivers license. There was speed competition, exceeding the speed limit, reckless driving. And NONE of it was true, he was just being a ….……. . My brother and I received the citations and we had to go to court. When we appeared the judge had only read what the cop had written about the violations. So he didn’t know we were on trikes. He asked “what kind of vehicle we were driving”? I said “we were driving tricycles your honor”. The entire court room burst into laughter. Even the judge was laughing. He had to gavel everyone to be quiet so he could continue with the arraignment. So he asks “you weren’t driving a car”? I answered “no sir just tricycles”. Again the court room laughed. I had the article from the Times with me and explained what they were. To make a long story short he determined that since we had no pedals that neither the automobile or bicycle laws applied to us. However he let us go under one condition that we brake no laws for 30 days. The court room applauded his ruling as we walked out.

Q. Did you experience sledging or attitudes from other new fringe sports of the era?
No not really. We had a couple of luge guys run with us one day. For sure there were no attitudes just people out having fun.

Q. One trike component you made/manufactured because it was not readily available?
Well of course that would be the frame. At first I only had one vertical tube. It failed on the second run. I added the second vertical tube and that’s the trike frame that you see today and was in the LA Times article.

Q. Did the trike just hang on the wall for all to admire before you restored it?
Actually no. It was up in the attic when Sharon (significant other) found it. She was putting away Christmas ornaments and stumbled on to it, it was way in the back corner. Sharon is the one that really wanted me to restore it.

Q. What means of transport did you use to get back up the top?
We had my 1963 VW bus that you see in the movie following us and my brother had an El Camino truck.

Q. How did the media of the time find you and was their attitude positive?
Well one of the riders had a friend that worked at the LA Times. He told his boss about it and the next thing I know is they wanted to do a piece on us. As for attitude is was very positive as it was something new and unusual.

Q. Do you think a modern 21st century free wheeling hub would have made the trike more utilizable ie riding the local beach paths shopping strip malls and towns in general?
I think if we had a freewheel hub it for sure would have made us slide more in the turns. The big difference between how we rode and what I see now is that we were actually racing and not sliding for style points. So for us since we had no pedals we tried to keep the slide minimal. We didn’t have pedals for us to pick up speed quickly again. It was all about momentum. The more you slid the more likely you were going to get passed. However, there were some turns that were so tight our slides look exactly like what I see in the videos of today.